Let’s talk about chiropractic care, diabetes and plant-based diets, extrapolating your perceptions, habits of successful people, and stretching your shoulders.

CONTROL YOUR BACK PAIN

Roughly 80% of Americans will experience back pain in their lifetime.  Chiropractic care can provide a safe, effective and drug-free approach to managing your pain. #ThinkChiropractic.  Low back pain is the leading cause of disability worldwide, contributing to missed work days, increased healthcare costs and excessive opioid prescriptions.  Besides with helping manage your pain, chiropractic benefits your general health and wellness.  Come on in, the water’s fine.  From the Foundation for Chiropractic Progress

We’ve known that type 2 diabetes could be reversed by an extreme reduction in food intake for nearly a century and a half, since the 1870 siege of Paris during the Franco-Prussian War. This has been demonstrated experimentally. By starving people enough, you can reverse diabetes. Diabetes specialists “have long known that the tiny proportion of iron-willed people [with diabetes] who can substantially decrease their weight and maintain this, can exhibit a return to normal metabolism.”

“A label is required to allow doctors to recognize and appropriately manage this subgroup who were willing to do anything to get rid of their diabetes. These are the Health Motivated. At the time of diagnosis, the Health-Motivated individuals will benefit from being advised that they are likely to be able to reverse their diabetes completely” by losing up to one-fifth of their body weight. And then—and only then—if they “show that they are not sufficiently strongly motivated should the routine guidelines for managing Type 2 diabetes be rolled out,” which include lots of drugs. Unfortunately, the control of blood sugar with medication has proven to be unsustainable and may actually exacerbate obesity, making us put on more weight and, thus, creating a vicious cycle.

There has got to be a better way.

Instead of starving oneself by eating less food, what if we just ate better food? What if we ate a diet that emphasizes all-you-can-eat greens, lots of vegetables, beans, nuts, seeds, and some whole grains, and is at least 90 percent plant-based? This would be a diet including at least one big salad every day (like a pound of raw greens), veggie-bean soup, a handful of nuts and seeds, fruit at every meal, a pound of cooked greens, and some whole grains, but no refined grains, junk food, or oil, and a restriction on animal products. Thirteen diabetic men and women followed this diet for an average of seven months.

How did they do?

Hemoglobin A1C is considered the best measure of blood sugar control. Below six is normal—that is, non-diabetic. The official American Diabetes Association target, however, is to get diabetics at least down to seven. Anything above seven is uncontrolled diabetes. In my video Reversing Diabetes with Food, you can see a stunning chart that plots how the study participants’ hemoglobin A1C levels responded over time after they start plowing in the plants. All subjects had had diabetes for at least seven years, and they started off with hemoglobin A1C levels ranging from as low as 6 to as high as 12. After they began following the plant-heavy diet, their levels consistently dropped, month after month. After about seven months, their average A1C dropped from a diabetic 8.2 down to a non-diabetic 5.8. The majority dropped down to normal, and this is after dropping most of their medications.

Now, this was a pilot study with only a handful of people, no control group, and including only people who could actually stick to the diet—essentially, a retrospective case series, considered one of the weakest forms of published evidence. However, the magnitude of the effect they found indicates that a high nutrient-density diet can be very effective for some people.

In Reversing Diabetes with Surgery, another one of my videos, I discussed how type 2 diabetes can be reversed with an extremely low-calorie diet. And, as I’ve just shown, type 2 diabetes can also be reversed with an extremely healthy diet—but is that because it is also low in calories? That’s the million-dollar question I answer in Diabetes Reversal: Is It the Calories or the Food?.

You may be aware that I’ve touched previously on the ability of healthy diets to prevent and treat type 2 diabetes. (See Plant-Based Diets and Diabetes and Plant-Based Diets for Diabetes if you haven’t yet watched those videos or want a refresher.) It’s so exciting to be plugging in the final puzzle pieces.

#13.  They practice gratitude.  A great example of how gratitude makes a difference is highlighted in the book The Gratitude Diaries by Janice Kaplan.  In it she tells the story of the new CEO of Campbell Soup, Doug Conant, who during his tenure wrote more than 30,000 handwritten notes to staffers and clients.  When he started, Campbell Soup was the worst performer of all major food companies.  Within a few years the company was outperforming the S & P Food Group and the S & P 500.  How might a show of gratitude make a difference in your life?

#14. They make time for “deep work”.  According to Cal Newton, author of Deep Work, the definition is “those professional activities performed in a state of distraction-free concentration that push your cognitive capabilities to their limit, to create new value, improve your skill and are hard to duplicate.”  Can you set aside time, in a place where you can’t be distracted, to get some serious work done, every week?

EXERCISE FOR THE MONTH

I am finding that the shoulder joint is one of the most troublesome and annoying body parts there is.  Even if you don’t have a trauma, there still seems to be trouble, and I keep seeing that it has a lot to do with poor posture and repetitive stress.  The first potential cause of shoulder problems is slouching and the second possible cause is carrying or performing the same movement with the same arm for hours at a time.  Obviously, changing your habit patterns is the first step, and stretching your shoulders is the second step.

I suggest you do the “Traffic cop stretch” at least once a day, if not twice.  This stretch helps relieve tension and tightness in your neck, shoulder and wrist.  Put your straight arm out in front of you and pull up your wrist into extension (like you’re telling someone to stop).  Move the arm out to the side and hold for 30 seconds, feeling a stretch from your neck to your wrist.  Repeat on the other side.  (Photo at bottom of the page)

THOUGHTS FOR THE MONTH

If ever the time should come, when vain and aspiring men shall possess the highest seats in government, our country will stand in need of its experienced patriots to prevent its ruin. -Samuel Adams, revolutionary (27 Sep 1722-1803)

True music must repeat the thought and inspirations of the people and the time. My people are Americans and my time is today. – George Gershwin

Our moments of inspiration are not lost though we have no particular poem to show for them; for those experiences have left an indelible impression, and we are ever and anon reminded of them. – Henry David Thoreau

The glory of friendship is not the outstretched hand, nor the kindly smile nor the joy of companionship; it is the spiritual inspiration that comes to one when he discovers that someone else believes in him and is willing to trust him.  – Ralph Waldo Emerson 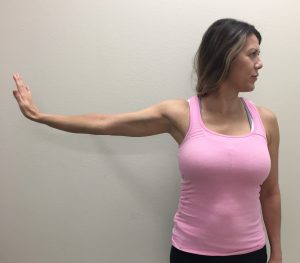