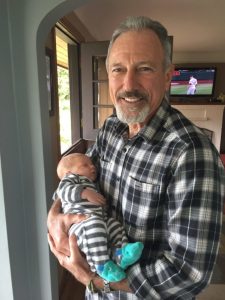 Doctor Benjamin Griffes lives in Thousand Oaks, California with his wife and three children. He practices chiropractic in both Tarzana and in Thousand Oaks. He has coached youth soccer and track, and has been the team chiropractor for high school volleyball, basketball and track, as well as collegiate cycling.

He graduated from Nova High School in Ft. Lauderdale, Florida in 1971 and attended Eckerd College in St. Petersburg, Florida, where he earned a B.A. in Theatre Arts, with a minor in filmmaking.

He moved to Los Angeles, California in 1976, and briefly entertained the idea of becoming a film director, attending USC’s film school. Changing courses, he was trained as a Hellerwork Practitioner by Joseph Heller in 1981, and set up his practice in structural integration and deep-tissue bodywork in Los Angeles.

In 1986, he completed his Master’s Degree in Physical Education, with a minor in Sports Medicine, at California State University, Northridge. In 1990, he completed the requirements to become a Doctor of Chiropractic from Cleveland Chiropractic College in Los Angeles, and began practicing in 1991 in Tarzana.

Since 1991, he has lectured, written articles, and taught courses in Sports Medicine, posture, health and stretching. Dr. Griffes produced and hosted the cable TV show “Chiropractic and You” for the San Fernando Valley Chiropractic Society for three years. He has written a book Stretching for Life, the easiest stretches you will ever do; created a stretching CD you use on your computer, and a DVD which shows you how to keep your back strong and flexible in less than 10 minutes.

DOCTOR OF CHIROPRACTIC FROM CLEVELAND CHIROPRACTIC COLLEGE IN LOS ANGELES, AND BEGAN PRACTICING IN 1991 IN TARZANA